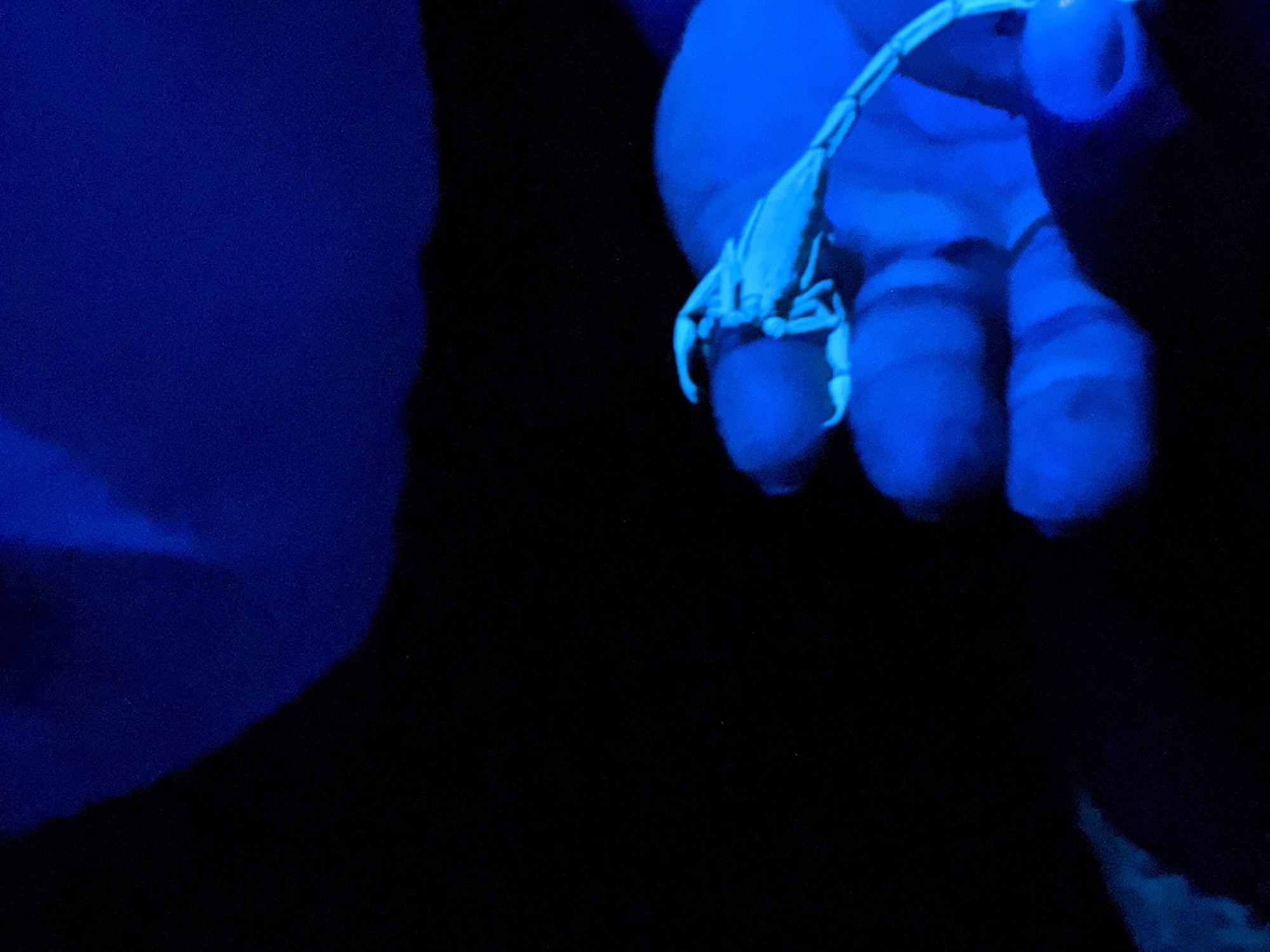 I woke up with a jolt to the pitch darkness around me.I thought I had heard a roar. And there it was again! Wild, deep, guttural sounds right outside our cabin.

“Are these the howler monkeys? Are they dangerous?” At 11PM and without electricity or cellular service in our cabins in the tropical forests of San Ignacio, all we could do was wait until dawn to learn more about the monkeys. I resolved to hold my bladder and stay in the safe confines of our cabin until then!

Getting To San Ignacio

After 3 days in Ambergris Caye, the husband and I had set out to explore San Ignacio in the Cayo district of Belize. A 2 hour drive down the Western Highway took us past varied landscapes – scraggy grasslands and bushes, acres of farmland with grazing cows, groves of citrus orchards, and the outlines of dense tropical forests.

We stopped at San Ignacio town to grab a quick lunch at Cenaidas -a local favourite with cheerful, yellow interiors and homely food- before heading on to our base for the next couple of days – The Macal River Camp at the Chaa Creek Lodge.

The last 5 kilometers to our destination was a bumpy 20 minute ride on an unpaved road built by the British Army Corps of Engineers in 1983. The husband muttered a prayer for our rental vehicle and carefully navigated our way up the hills and into the grounds of Chaa Creek.

With 400 acres, the cottages and camp site at Chaa Creek are sprawled over a hilltop with the Macal river flowing through the property. We checked in at the Main Lodge reception and were picked up by Dosio, the camp manager. A 5 minute drive through steep dirt pathways brought us to our Casitas in the middle of the forest – clean, spartan wood cabins with canvas roofing lit up by kerosene lamps – no electricity, internet or phone service. The husband made a beeline for the hammock on our private balcony with a view of the dense, lush foliage. Beneath, we could see the Macal river snaking its way through the forest.

Dosio, his wife Francelia and his son Ariel run the camp – cooking delightful Belizean meals, ferrying people up and down to the main lodge, and coordinating tours. We had communal meals in the dining hall – a thatched casita in the middle of the camp – with everyone exchanging stories about their adventures that day. The guests at the camp are an adventurous lot with many returning every couple of years. We spend evenings conversing around the bonfire, gazing at the stars, reading books by the light of kerosene lamps and listening to the symphony of birds and cicadas late into the balmy night. Earplugs were essential when the howler monkeys became too boisterous!

A brisk, 10 minute walk up a steep pathway cut into the hillside, brought us to the Main Lodge, which is worlds apart – luxury cottages with every convenience that one can ask for. We spent a few evenings at the bar, trying out various concoctions and local infusions that Umberto, the bartender, served us according to his creative mood that day.

Chaa Creek maintains a butterfly farm showcasing the life-cycle of the Blue Morpho and the Owl butterflies. Hundreds of butterflies flit across the room at various stages of their short life. Rows of pupae are lined up in one corner and butterflies laying eggs can be found in another.

In the evening, we paddled upstream , prompting a flock of egrets to take flight, and watched dusk fall across the forest. The water levels in the river were low because of scanty rainfall the past year. At certain bends in the river the low water levels forced us to step out and drag the canoe upstream until we reached deeper levels.

At 8 PM that night, we gathered in front of the bar as Leonso, our guide, handed out headlamps and instructed us to stay quiet, watch our steps and follow him on a trail into the forest. With the light from the headlamp he pointed out tarantulas peeking out of their burrows, scorpions with their menacing pincers, owls, ants and other creatures that inhabit the forest.

The earliest evidence of the Mayan civilization in Belize dates to 1200 – 1000 BC. The Mayan civilization, centered around the Yucatan peninsula and Guatemala, reached the peak of their civilization around the 6th century AD and then declined after. Excavations have unearthed palaces, pyramids, plazas and cities that highlight their past architectural and engineering ingenuity.

We avoided the long rides to Caracol and Tikal, and decided to explore the excavations of Xunantunich (pronounced: shoo – nun – too – nitch), a 20 minute drive from our lodge. En route, we crossed the Mopan river, on a hand cranked ferry that accommodates 4 – 5 vehicles at a time.

The most imposing structure in Xunantunich is El Castillo, a 40 metre tall pyramid that serves as a shrine and palace for the rulers of Xunantunich. On the sides of the pyramid are stucco friezes representing the gods.

The structure is built to impress and intimidate. The ruler addressed his subjects from the top of the pyramid. The acoustics of the plaza ensured that his voice reverberated and was amplified. The steps are hard to climb and for the short 5 foot Mayans, they would have had to stoop to climb up.

We had booked the River Cave Expedition with Ian Anderson’s Jungle Lodge, a 1.5 hour drive through the scenic Hummingbird Highway. Our guide, Wilmer, picked us up in an army truck and drove us for 20 minutes past citrus groves laden with fruit until we reached the start of our expedition.

With inflated tubes and headlamps, we made our way to the stream. Splash! The current was strong and with aching shoulders, we back paddled our way against the current and into the catacombs. Our headlamps illuminated beautiful, shimmery mineral formations, stalactites and stalagmites and colonies of bats hidden in shadowy corners.

The Mayans, believing that Gods resided in the caves, journeyed deep into the cavern system to offer human sacrifices and practice bloodletting rituals. They hoped to appease the Gods and petition them for rains, good harvests, to win wars and to have children. Tools for bloodletting – sharp obsidian rocks and stingray spines and ceramic pots functioning as receptacles to collect blood – have been discovered by archaeologists and can still be seen in the caves.

After 3 hours of wading through cold streams and exploring the cave, we were hungry. We were now so far in that when we switched off our headlamps, it was complete darkness….like being blind. We were far away from any source of light.

Wilmer spread out a candle lit lunch for us – fluffy wheat tortillas, eggs, cold cuts and vegetables. As the candles flickered and threw eerie shadows around the cave, it was’t hard to imagine how Mayans in their hallucinogenic drug induced state believed that evil spirits and underworld Gods that demanded bloody sacrifices lurked here.

Belize is a favourite destination for bird watchers from across the globe. The country boasts a diverse habitat and is home to a variety of bird species.

We had signed up for a half day (and our first) birding trip to Laguna Aguacate in the Spanish Lookout with Jeronie Tut. Our trip started right outside Chaa Creek, where Jeronie pulled out his spotting scope and pointed out red billed pigeons, melodious blackbirds, social flycatchers and the great kiskadee, while we frantically tried to spot them before they flew away.

We drove past various habitats on the way to the Laguna. We spotted vermillion flycatchers, roadside hawks and fork tailed flycatchers as we passed vast acres of farms owned by the Mennonite community.

By a marsh land, we spotted woodstorks, the little blue herons, northern jacana….and through the spotting scope, Jeronie pointed out an olive throated parakeet perched high on a Cacao tree.

Further along in tall forests, Jeronie listened intently and we heard a croak like sound. “That’s the toucan!” We had our first sighting of the keel billed toucan, the National Bird of Belize, perched at the top of a tree. This was shortly followed by a sighting if the rufous tailed jacamar and a very industrious, black cheeked woodpecker.

At the lagoon, we spotted our 2nd keel billed toucan and the yellow crowned night heron. After spotting about 40 species of birds, and with a light drizzle starting to get us wet, we called it a day.

We made a pit stop at Western Dairies, a Mennonite ice cream and dairy farm before driving back to the city to grab some lunch at the popular Ko-Ox Han Nah.

Where to Stay in San Ignacio?

After having traveled across San Ignacio, we highly recommend staying in one of the jungle lodges to experience the rain forest rather than staying in town. A few places that we considered were:

The 2 restaurants that we loved in the city were Ceneida’s and Ko-Ox Han Nah. The latter comes highly recommended for its lamb dishes.

Traditional Belizean food consists of rice and beans, chicken stew, fried plantains and cabbage slaw. Belizean rum and Belikin beer are the drinks of choice. The one condiment that appears at every table is Marie Sharp’s hot habanero sauce. We fell in love with this tangy, spicy hot sauce that seemed to go with everything – pineapples, jicamas, raw mangoes, rice, barbeque chicken, scrambled eggs……..

We now have a bottle of Marie Sharp’s on our dining table in Houston reminding us of our beautiful time in Belize.