“ID’s please….No cover charge. You’ll have to order a drink for every set”….The bald, 6-foot-something, surly bouncer looked like he meant business.

We had stepped into the d.b.a on Frenchmen Street, a local institution that features live music and regional bands. Aurora Nealand and the Royal Roses were playing tonight.  We ordered our drinks and walked towards the dimly lit stage.

Couples effortlessly danced to a lively riff on the trumpet. I watched a pair in their 60’s twirl and jitterbug across the dance floor. These were obviously pros! I tapped my foot to the lively jazz. The last time I danced was at my wedding, after which my sister commiserated with my husband on having a wife with two left feet.

The song ended. The couples switched partners and the complicated footwork continued. Aurora Nealand was working up the crowd. We sipped our beers, enjoyed the music and camaraderie and slipped out when they finished the last set.

Our trip to New Orleans had been hastily planned. The husband and I had discovered that we had 2 Southwest tickets expiring soon. The fact that it was summer and that temperatures routinely soared above 96 F had completely escaped us. Now that we were in the city with the heat-beating down on us, the afternoon walking tour we had signed up for didn’t seem like a great plan. “This park was built to honor Louis Armstrong. ”……..was all I remember before being overcome by the heat and humidity.  Guilt stricken, the friendly guide emailed us some of his favorite spots in the city for live music. And that was how we found ourselves in d.b.a while all the tourists crammed into The Spotted Club right next door. 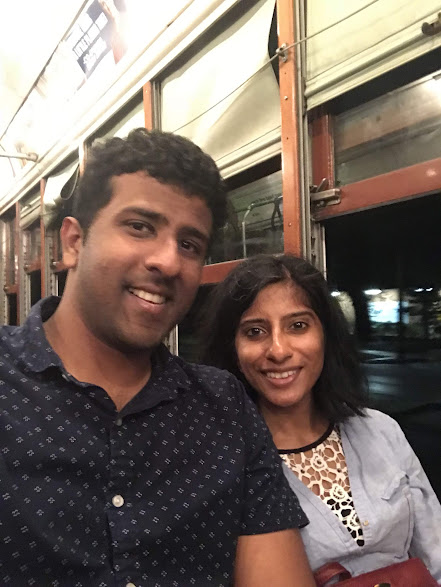 The next evening, rains brought down the soaring temperature. We decided to take a ride on the historic streetcar down the St Charles line. We heard the car before we saw it – a low rumbling like an oncoming train. We stepped in and were transported back a century. Gleaming mahogany seats, brass fittings and light bulbs greeted us. I opened up the windows and the cool breeze from the rains wafted in. We were off!

The clack clack of the rails, the clanging bells and the droplets of rain hitting our faces added to the charm. It was an odd assortment of travelers – musicians who had played in the city and who were heading back home, tourists like us who were exploring the city, drunk bachelors and bachelorettes on a wild trip before being domesticated by marriage, and local residents who either didn’t want to navigate the unruly streets on cars or couldn’t afford anything other than public transport.

The Streetcar rumbled to a stop and slowly made its way around a circular intersection.

Google maps informed us that this was the site of the recently removed and controversial statue of Robert Lee. Ironically, the circle is still named Lee’s Circle.

Huge mansions with numerous columns lit by spotlights and rows of live oaks told us that the well-heeled of  NOLA lived in the Garden District. The Loyola and Tulane Universities whizzed past us as we watched the rapidly changing landscapes of the city. The $3 tickets were well worth the 45 minute tour in these quaint cars. 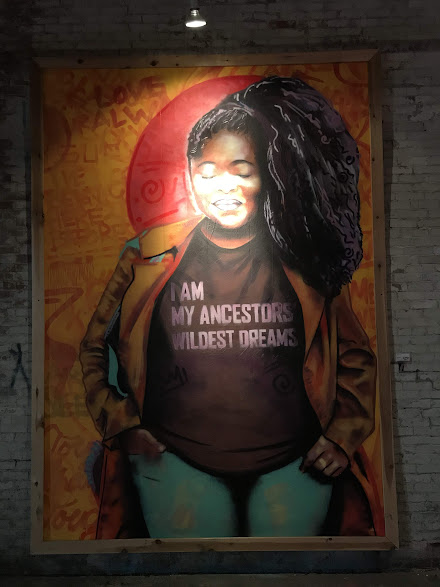 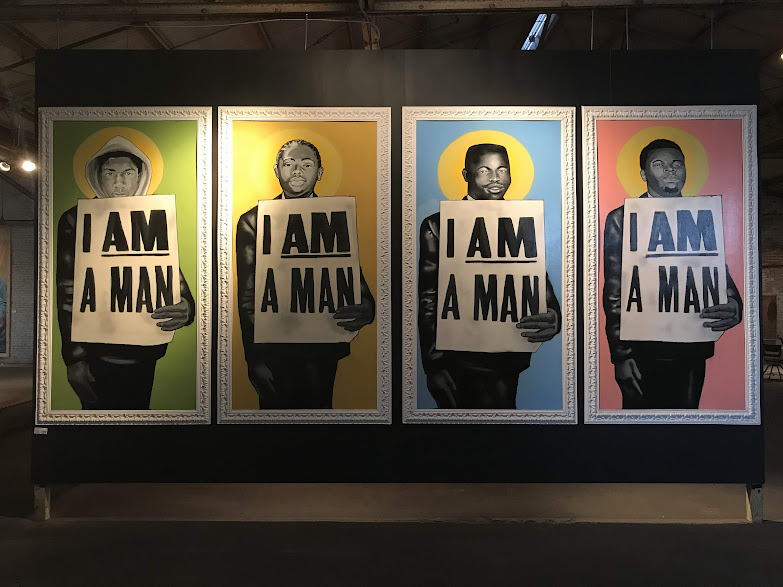 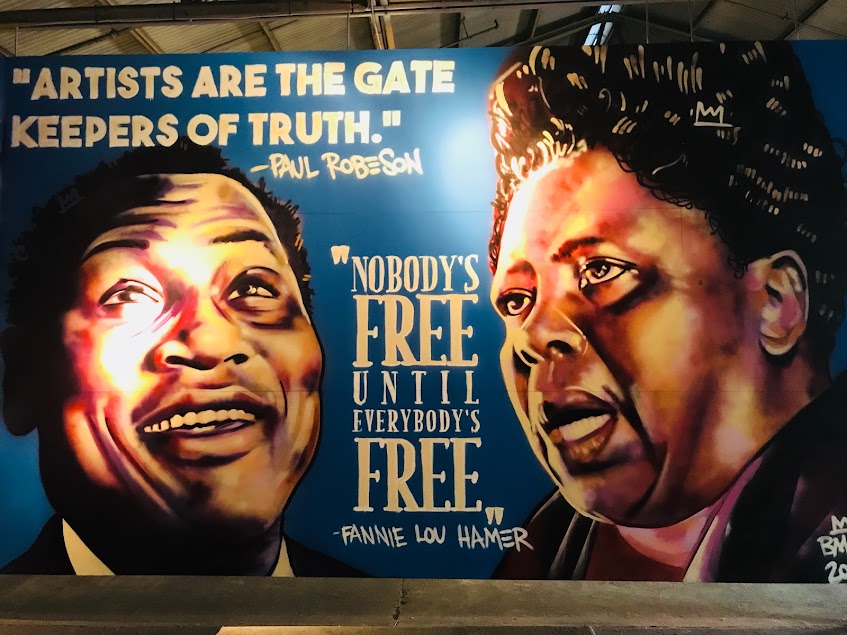 Next morning, we took a taxi to an art gallery in the Bywater neighborhood – Studio Be by Brandon Odums or BMike. The gallery is an old, run-down warehouse that has been re-purposed. It proves to be an apt exhibition ground for his work on the social injustices that Blacks face in the city and in America. There are powerful, ceiling-to-floor, spray painted murals of icons for social justice and installations on the aftermath of Hurricane Katrina.

“I was on the roof of a grocery store in my underwater neighborhood for 3 days and 2 nights……..I saw dead bodies floating in water, I still remember the smell……”

The accounts from survivors of Katrina speak about the government antipathy towards rebuilding the poorer and primarily black neighborhoods in the city. 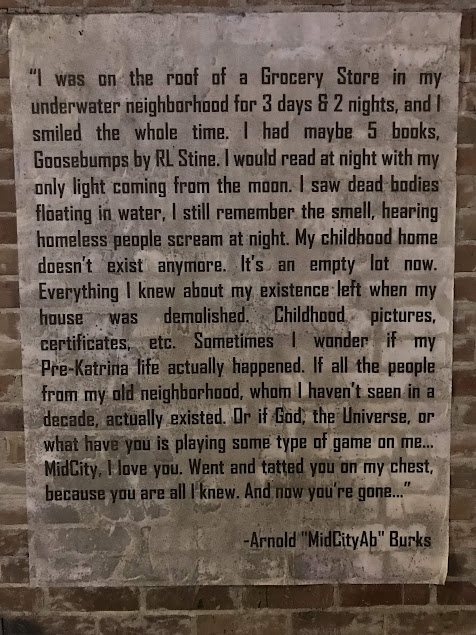 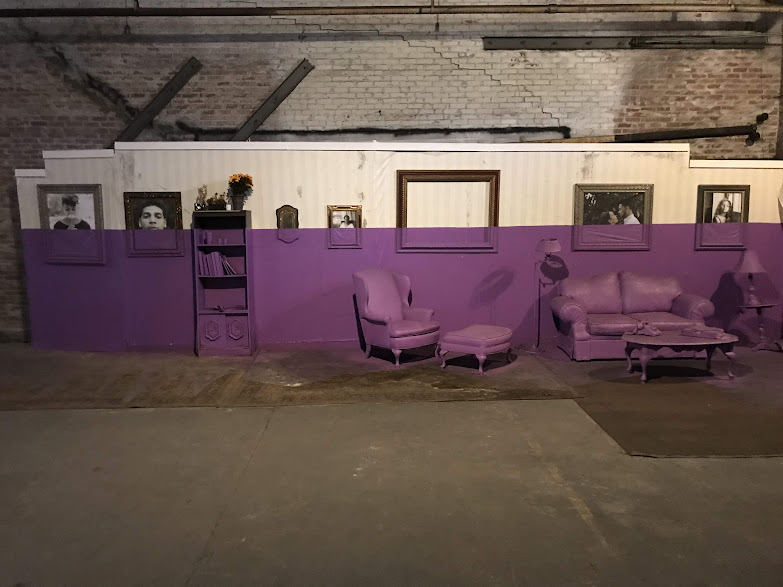 On our last day in New Orleans, we explored the French Quarters dotted by neat rows of Creole townhouses. This pretty world is a far cry from the sordid underbelly of New Orleans we witnessed earlier. Throngs of tourists milled around, stopping at the steeply priced cafes and window shopping at the voodoo and occult shops.  I struck up a conversation with our tour guide and asked him what he thought about BMike and Studio Be.

“I haven’t specifically heard of him……but it seems to be a fad for artists to take up the cause of social justice. Artists should stick to art and not get political” 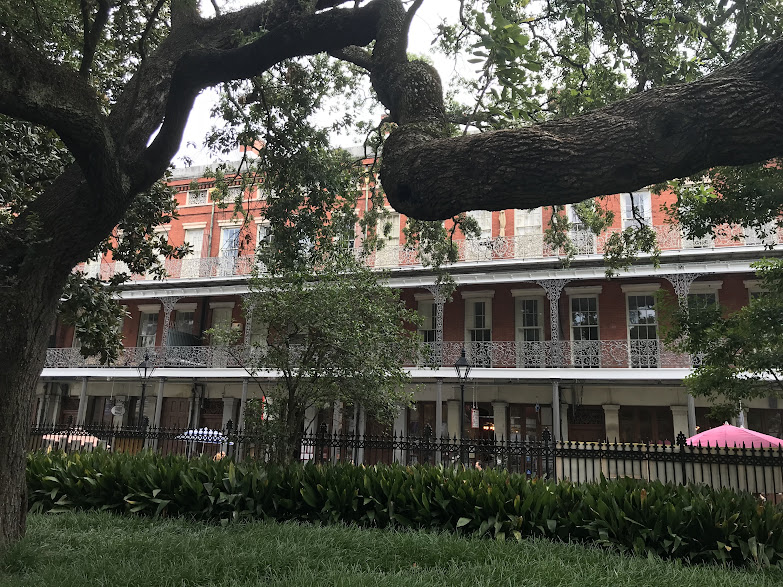 We reflected on our trip while relishing our meal at Maypop – a restaurant that married Asian and Louisiana culinary traditions. Dumplings with blue crab and octopus,  gazpacho flavoured with crabmeat, noodles with coconut curry and shrimp and dessert of stewed peaches with angel food and halvah ice cream. And that artistic but uneasy, eclectic mix is New Orleans. Right there on my plate!