Reggae beats punctuated the sound of waves crashing into rocks. The lead singer, with fashionable dreadlocks and a joint in his hand, crooned, “Give me my marijuana…..and leave us alone……”.

The sunset across the Atlantic bathed the scene in a romantic glow, whiffs of contraband marijuana mingled with the salty spray from the ocean, and soft pops of beer bottles being opened set the stage for the evening ahead as the partygoers danced to the music. This was no Ibiza. The husband and I were in La Perla, or the Pearl, a contradictory name for the slum right outside the walled city of San Juan.

Three centuries ago, this part of the city was shunned by the well-heeled. Slaughterhouses and cemeteries were located here. Today, the former slum is undergoing a cultural revolution. The music video from Despacito was shot here with Puerto Rican beauties gyrating through the gritty streets of La Perla. The place still retains its grittiness. If you’re in trouble in La Perla, even the police wont come to save you. With that fair warning ringing in our ears and with nightfall settling in, we made our way back to Old San Juan.

San Juan, the capital of Puerto Rico, was built by Spanish colonists in the 16th century, and its most striking architecture today is the sprawling fortress of El Morro, built to defend Spanish interests. El Morro is situated at an elevation on the northernmost tip of the city, offering a strategic military viewpoint over the Atlantic.

It had the reputation of being the most impregnable Spanish fortress built and defended against attacks from the English, French and Dutch…that is, until at the turn of the century in 1898, when Puerto Rico was ceded to America after the Spanish -American war. At every corner of the fortress is a Garita or sentry box where in past centuries, armed guards stood watch….today it is prized by instagramers looking for that perfect shot.

We walked through the cobblestoned streets of Old San Juan and up the stairs of an old, historic looking building into Mezzanine, a cocktail bar that came highly recommended, and settled into one of many balconies that offered a view of the street below.

“Is this your first time here?”

“This used to be the home of Pedro Alberto Campus, the leader of the Puerto Rican Nationalist movement, that has now been converted into a cocktail bar….”

And with that introduction, we sipped our cocktails, made with local Puerto Rican rum and steeped in history. 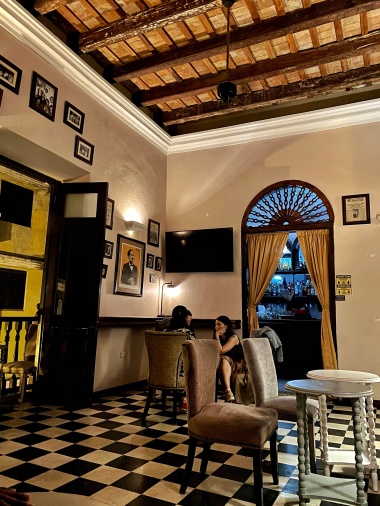 Puerto Rico’s quest for independence has been a complicated and elusive journey. After 400 years of Spanish rule, the island was finally granted an autonomous government in 1897 while still remaining a province of Spain. However, this freedom proved to be illusory. A few months later, Spain ceded the island to the United States at the end of the Spanish-American war. The fight for independence continued…from fighting one colonial master to another. 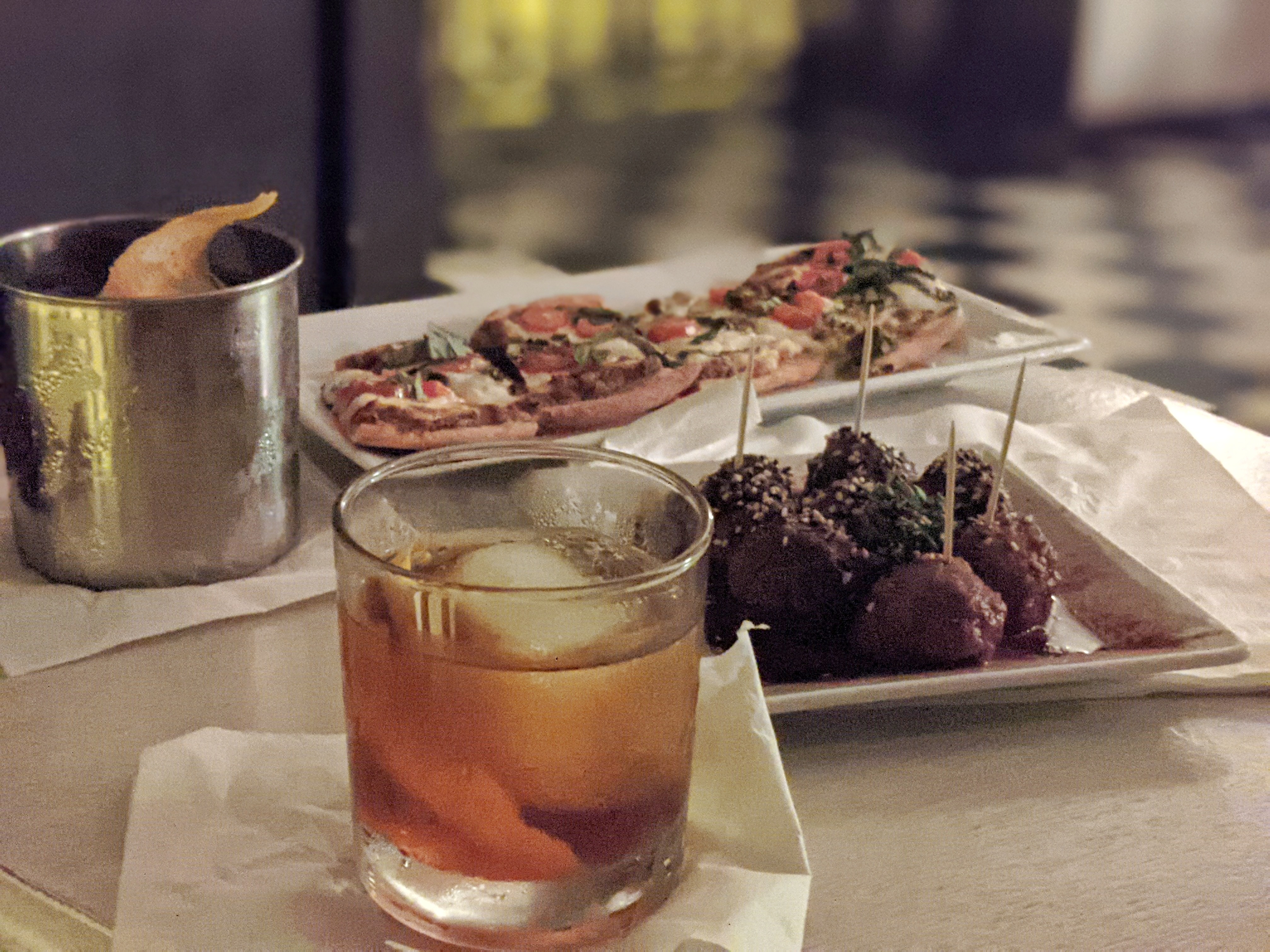 Pedro Alberto Campus was a Puerto Rican revolutionary and leader of the Nationalist party. An impassioned orator and a Harvard educated lawyer, he called for armed uprisings against the US to fight for independence. With his legal skills, he even registered a bond on Wall Street, an investment into the republic of Puerto Rico and redeemable on the first day that the island gained its independence.

He was arrested from his house after a 2 day siege, with the police and National guard shooting and bombing the building with tear gas. Today, that building has been converted into a speakeasy style lounge serving cocktails with a heady mixture of history. 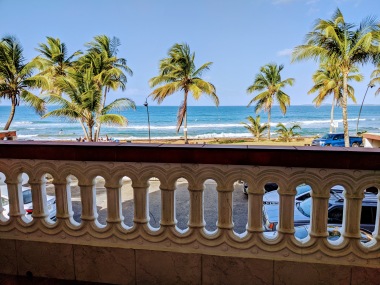 The next day, we picked up our rental car, with which we planned to drive around the coast of Puerto Rico over 2 weeks. Our first stop was a 40 minute drive to Luquillo beach, where we stayed at the Sunrise Beach Inn. Our balcony overlooked the beach dotted by tropical palms swaying in the wind.

The beach offers a little something for everyone – great waves for surfers with many surfing schools, a protected bay for families with gentle waves to swim in, and is also home to Leatherback turtles. Leatherback turtles are the largest marine turtles in the world, growing up to 6.5 feet and weighing up to 2000 pounds. And while we didn’t spot any of these giants, we saw a couple of nesting sites and the unique, circular tracks left by the turtles as they home in to their nesting spot.

The husband and I next headed further east, to the islands of Vieques and Culebra. On arrival at the ferry terminal, we were greeted by news of the ferry being cancelled. Locals protested the unreliable service. The ferry is the nerve center connecting the islands and the only economical way to reach the main island of Puerto Rico and to hospitals, supermarkets and medical supplies.

The only way to reach Vieques today was through the puddle hoppers, regional light weight aircrafts with 6 – 8 seats, connecting the islands. Our wallets considerably lighter, we boarded from the Ceiba airport and had front row seats on our 10 minute flight to Vieques. The views were unbeatable but the turbulence from the crosswinds had me nervous. 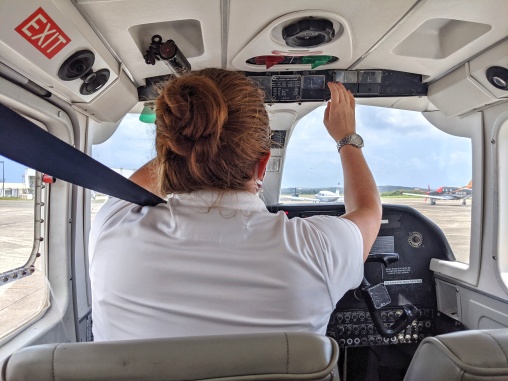 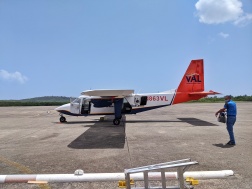 We stayed in an eco-friendly bed and breakfast, Casa de Tortuga, run by Skip and Linda. They had survived the hurricane and its after effects. Recovery efforts from the mainland US were slow and they were left to fend for themselves without electricity and water for 8 months. After that ordeal, they reduced their reliance on the grid and invested in solar panels and harvesting rain water.

Vieques is home to one of 5 bioluminescent bays in the world. That evening, we set off on kayaks, in the swampy mangrove filled Mosquito Bay, with only the waning light of the new moon guiding us .

As our paddles cut through the water, it left a glimmering, luminescent trail. A large concentration of organisms, dinoflagellates, were responsible for this phenomenon. In high concentrations, they light up with movement and produce a glow in the dark effect. We kayaked for a few hours in the warm waters, entranced by the shimmering light.

Next on our itinerary was the neighboring island of Culebra. Though closer to Vieques than the main island, the lack of infrastructure meant that we had to take the ferry back to the main island and then find another mode of transportation to Culebra. Having quickly tired of the unreliable ferry, we signed up for one of many tourist boats that offer a day trip to Culebra.

With loud music blaring and unlimited drinks provided, these boats zip through choppy waters, paying little heed to its drunk patrons. Half the boat parties to the music, the other half heave and gag with motion sickness. Just like any other tourist excursion, we are told that we had 30 minutes to snorkel in the calm bay by Culebra before we moved on to the next stop – Flamenco beach. 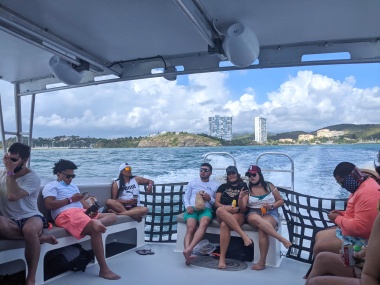 Flamenco beach is world famous and is consistently ranked as one of the most beautiful beaches in the world. With fine white sand and turquoise blue waters, it is easy to see why. But what is incongruous about the beach is the rusted remains of a US army tank lying abandoned in a corner of the beach, a grim reminder that these islands were once training sites for the US Army.

The islanders complain that these sites still contain extensive amounts of hazardous material, unexploded munitions and environmental contaminants. Another cross in the litany of complaints against the US government. 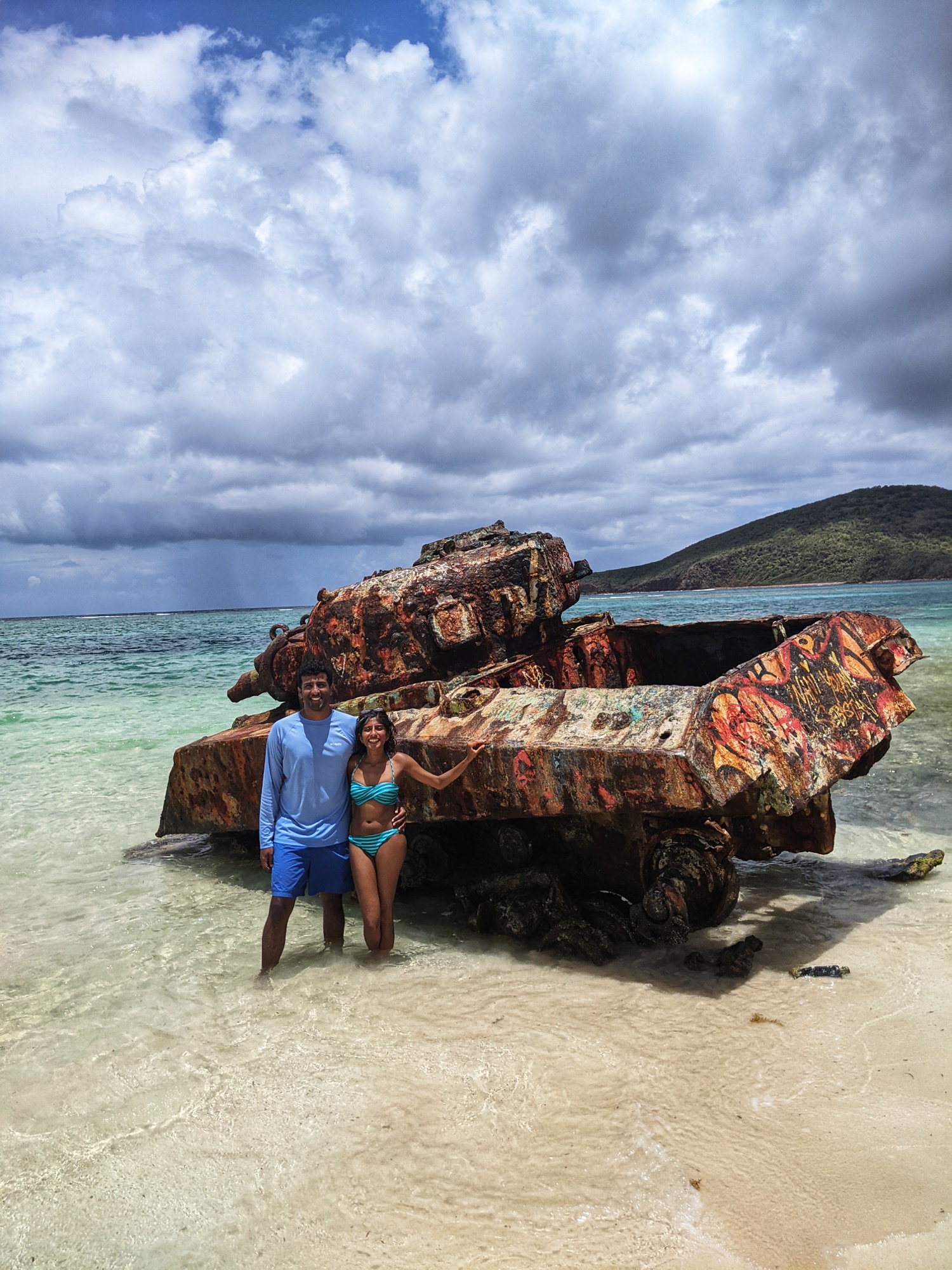 Sunburnt, exhausted, and reeling after the loud music on our boat, we drove through the winding roads and up the cool mountains of El Yunque, a national rainforest. The next couple of nights were spent at Casa Cubuy, an eco lodge offering spartan but clean rooms with spectacular views of the rainforest. We were lulled to sleep with the sounds from a nearby waterfall and the Coqui tree frogs with their distinctive “Co Qi- Co Qi” croaks. 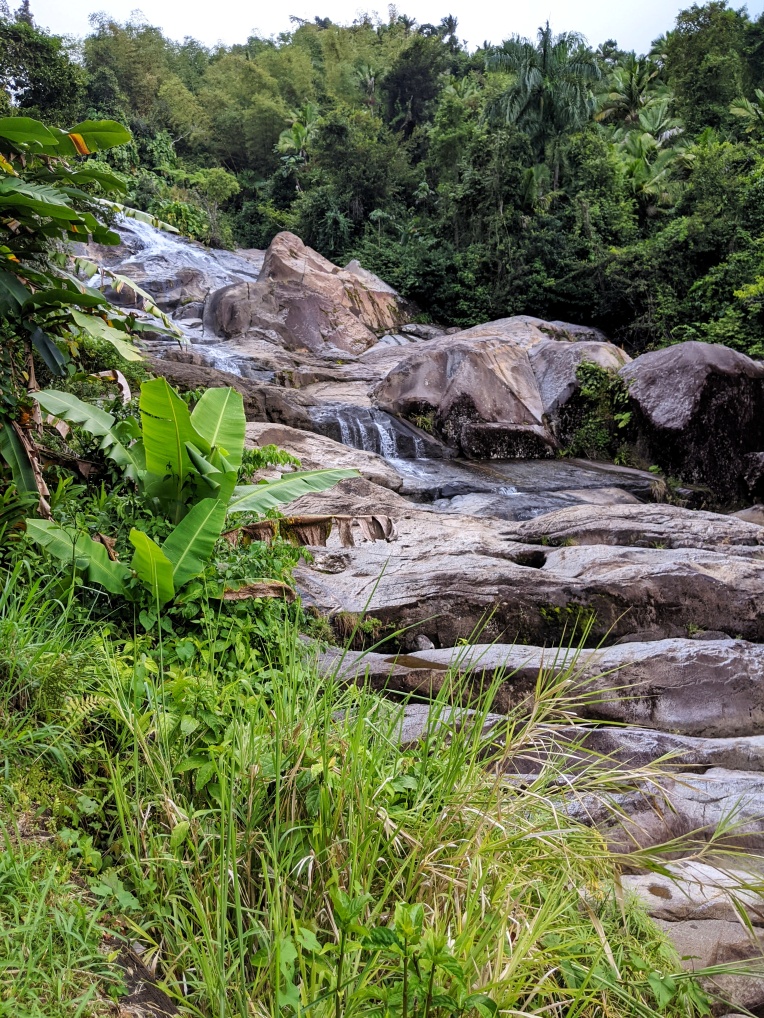 After a breakfast of fresh fruit, eggs and porridge we walked down a short trail to a waterfall and swam in the natural pool. Our days were spent hiking up the trails of El Yunque and at nights, we quickly fell asleep serenaded by the sounds of the rainforest.

The lodge is run by a mother and son duo. Marianne, the owner and in her 90’s, conversed with us about her experience of moving from Miami to San Juan in the turbulent 60’s to teach at a local school. She ended up making Puerto Rico her home. 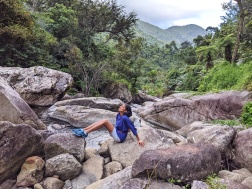 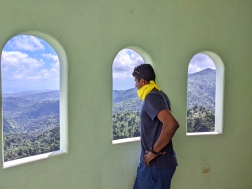 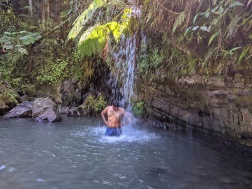 We had a long drive ahead of us as we planned to loop across the western part of the Island and head to the beach town of Isabella. We halted at Ponce for lunch, a city founded by the Spanish, and which retains its colonial architecture.  The heart of the city is the plaza at the city center with sparkling fountains decorated with sculptures, a cathedral and neat rows of buildings with colonial architecture. 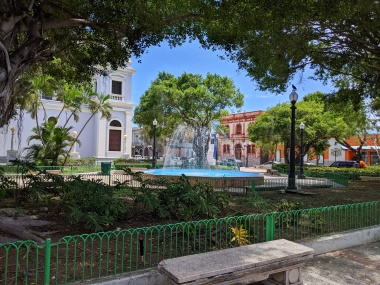 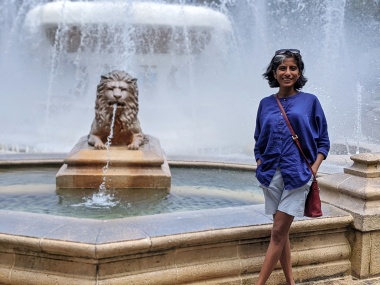 By evening, we had arrived at Cabo Rojo, the westernmost tip of Puerto Rico with spectacular cliffs and salt flats. We parked our car by the side of the road and took in the views of the expansive vast pools of evaporating brine stretched out before us.

The picturesque pools varying in colour from brackish grey to shades of pink were crisscrossed by narrow walkways, wide enough for a person to pass through. From here we drove up to the lighthouse in Cabo Rojo. We hiked up from the parking lot to the lighthouse and to the dramatic white, limestone cliffs to watch the sunset. 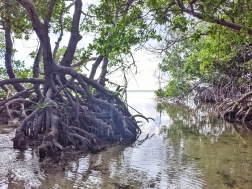 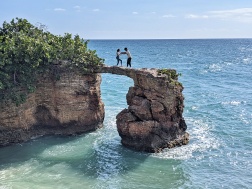 Our last base in Puerto Rico was in the surfer town of Isabella. We stayed in an impersonal Airbnb, a short walk away from the beach. Our days began with a swim in the ocean, we explored the neighborhoods and then at sunset, sat by a restaurant with a chilled Medalla beer and sampling the local fare – plantain based dishes like mofongo with a fiery seafood curry, or rice and beans. 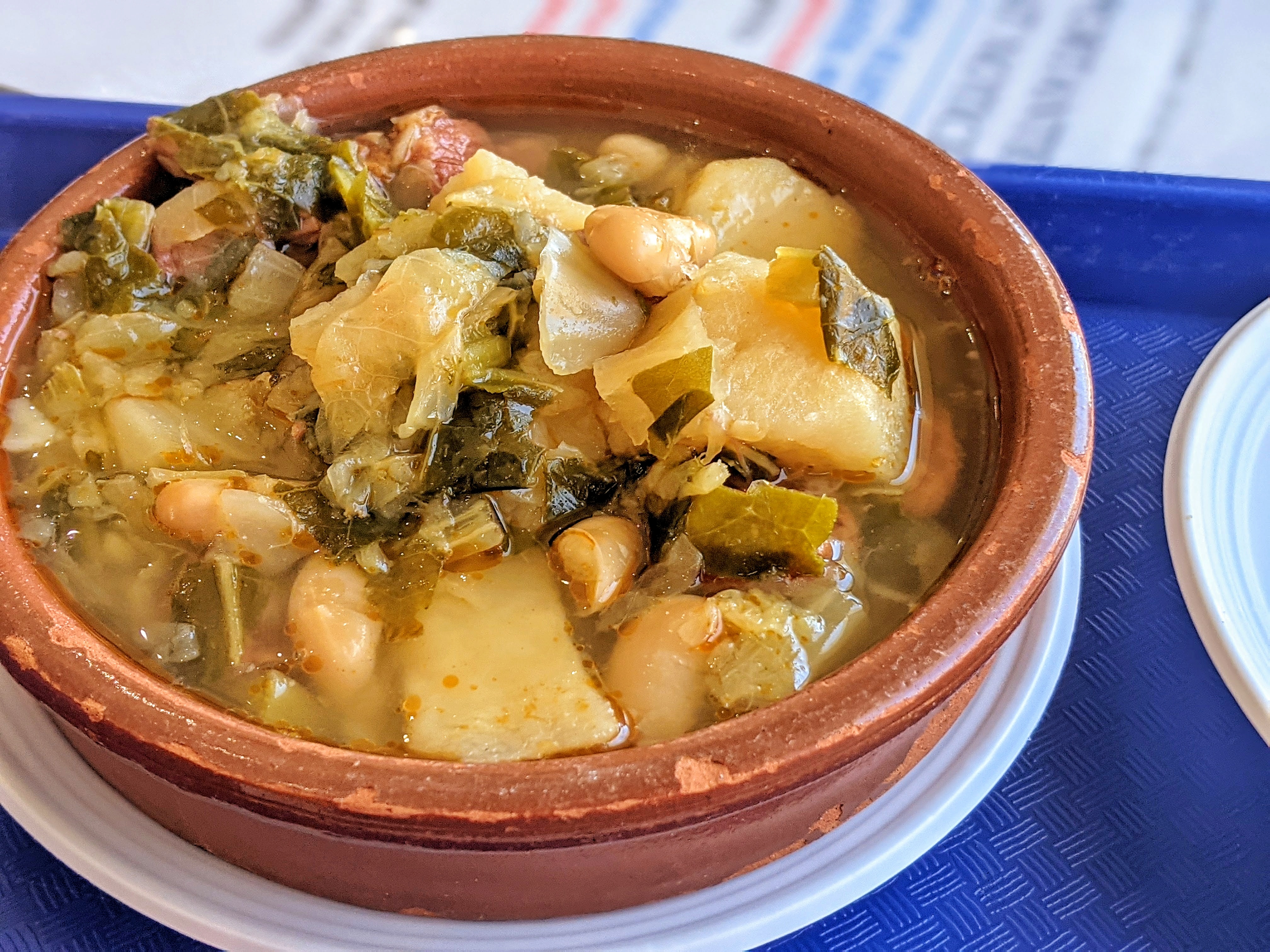 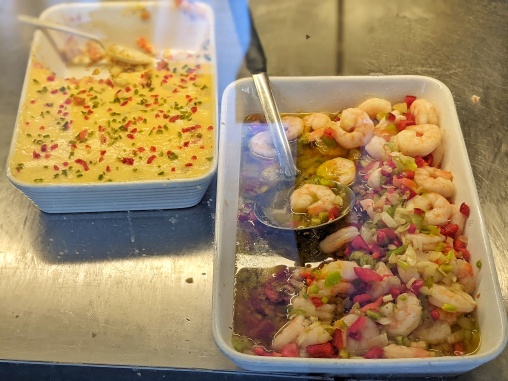 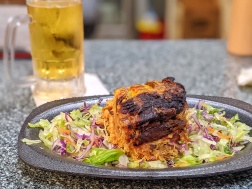 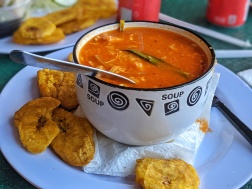 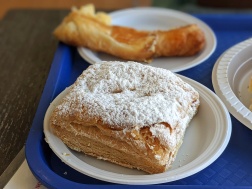 One day, we decided to make the hours drive to Arecibo, to visit caves that had carvings by the Taino Indians, who had inhabited the island before the Spanish. We walked down to the caves through a steep flight of stairs with helmets to protect us from falling rocks and flashlights to guide us, our excitement building up with every step. Our guide finally flourished the carvings and we gazed at a rough carving of a smiley face staring back at us, and wondered if it was rude to laugh out at this anti-climactic finish.

Our holiday coming to an end, we packed up to leave to the airport and as we drove we turned on the radio to hear an American tourist blithely complaining about the lack of American flags in Puerto Rico. Did he know of the complicated history of Puerto Rico and the uneasy relationship the island has had with the US?

While the island has long given up its demands for Independence, it grapples with the decision of becoming the 51st State in the US. In the last vote conducted a few months before we visited the island, 52% of Puerto Rico’s residents voted for statehood, while 47% of residents voted against it. 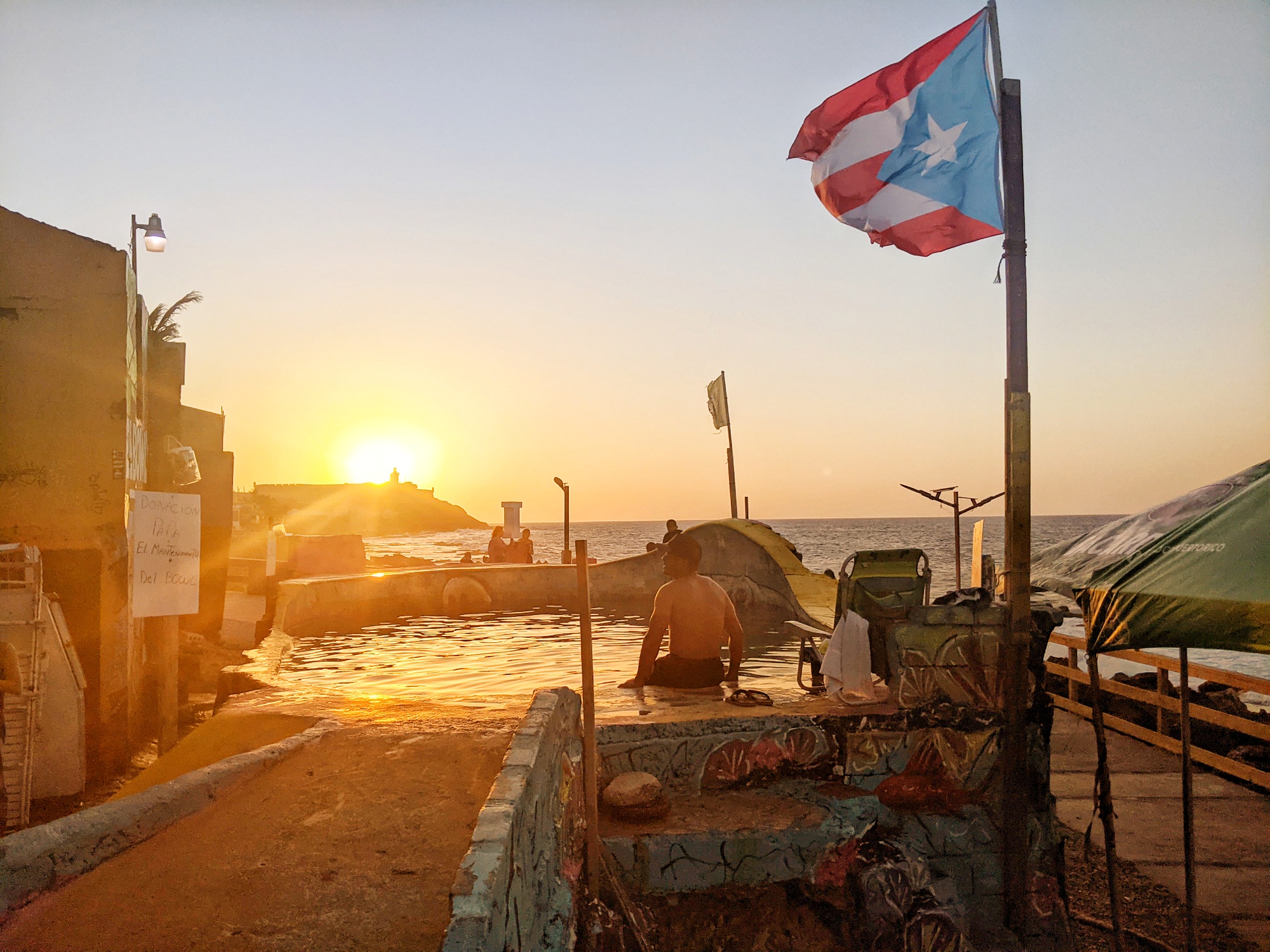 One thought on “Puerto Rico: Life In An American Colony”